The Lord hasn’t passed you by. He is going to heal you. 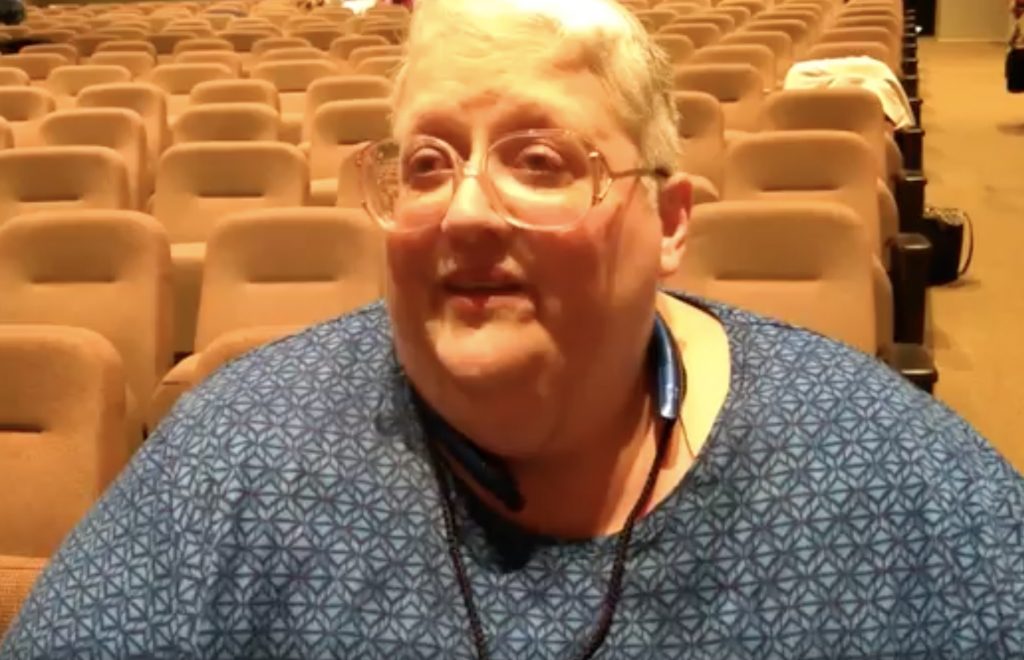 10 years unable to walk without the aid of a walker or handicap scooter.

During one off the ministry times at the More Love More Power conference, I happened to notice a lady sitting on her mobile walker. I could see the Lord’s presence resting over her, and I felt like I was to go pray for her. As I approached her, I thought of Blind Bartumaes in the Bible and his cry “Son of David, have mercy on me.” Her name was Vicky. I felt I had some words of knowledge about the conditions in her body – neck pain, left ear problems, and head trauma.

“Vicky,” I said. “The Lord hasn’t passed you by. He is going to heal you.” I began to explain the impressions I had received for her. She explained to me that her spine and hips were deteriorating and she hadn’t been able to walk for 10 years. She had also been in an accident years ago which messed her neck up. She was losing hearing in her left ear. She had some sort of breathing problem, and it had been years since she had been able to sing and worship, which she so loved. She also had a trauma to her head and was battling many other physical issues as well as emotional and spiritual oppression.

I had no intention of even doing any ministry at the conference. I had been on the opposite end of the auditorium as hundreds of people had responded to the message Robby Dawkins brought that night. I was just standing and watching, but I didn’t feel anything. I was super tired and had no desire to do any ministry. Then out of the blue Robby had called my name and said, “I’m going to have Brian pray over everyone and release an impartation.” I was a bit taken back and only responded because Robby asked me. The challenge was getting to the platform–the aisles were jam packed with people several rows deep. The only way I could make it to the platform was by crawling over rows of seats and stepping over people on the floor and squeezing my way through. It was no easy task.

Then Robby said, “Brian, pray and release an impartation of what happened to you in South Africa.” I did it just because Robby asked, but I felt nothing on it. I was thinking he’s seeing something I’m not, because all I wanted to do was stay in my seat. I came to the conference to just relax, rest, connect, and receive, but there I was up front, praying what seemed to be so unanointed.

After giving the mic back to Robby I thought, well there isn’t any way I can make it back to my seat or to head back to my hotel. I was so tired. So I thought I would just pray for a few people that were jammed up against the stage. Then to my surprise, several people started getting blasted by the Holy Spirit, shaking and falling back under the power of the Spirit. Even though I had been tired and not in the mood to be doing any ministry, when I saw the Spirit touching people, it jolted me out of being tired. So I began to minister to as many as I could from being on top of a large platform. I was having to bend over and just barely touch people, and the power of God was hitting them. I was trying to figure out how to get down so I could minister to as many as I could because the presence of God was hovering powerfuly in that spot.

Next thing I knew, Happy Leman, the senior pastor in Urbana, came over to me and said, “I need you to go over to the other side of the auditorium. People are needing prayer over there as well.” Honestly I was a bit perturbed and wanted to object that something was happening right here. I wanted to keep blessing what I was seeing the Holy Spirit doing. But then I remembered we are to honor and obey our leaders, so begrudgingly I agreed. Outwardly I said, “Sure, I’ll do that”, but at the same time I was thinking, “Boy, did Happy miss that! Didn’t he see what was happening?” I felt like if I could have stayed there a bit longer, it would have increased in power and then multiplied throughout the whole place. I could just see it.

So I walked over and I didn’t sense that same anointing on this side of the auditorium. Then I thought I didn’t want to be up here in the first place. I’m tired. Maybe I can just slip on through and head out to the hotel. I decided to at least try and pray for a few so I wasn’t dishonoring Happy. That’s when I saw Vicky and heard the Lord say, “I haven’t passed her by. I want to heal her. She’s crying out in her heart like Blind Bartemaus. I immediately had a sense of compassion and faith to see Vicky healed.

As I was praying for Vicky, she said she felt heat come all over her body. She was shaking under the presence and weeping. It was so beautiful as the Holy Spirit began to rest upon Vicky with healing. I then said to Vicky, “Is there something you can’t do?””Walk,” she said. “Would you like to give it a try?” Without hesitation, she said yes. At first I helped hold on to Vicky, and as we walked I just kept praying over her. We walked from the from of the front of the auditorium to the back. Along the way, I would let go and Vicky would be walking all by herself. Every time we tried this, Vicky walked farther. It was amazing. She was weeping and smiling saying, “I couldn’t do this! It’s been 10 years.” After the second walk from the front to the back of the auditorium I asked Vicky how she was doing. “I’m getting sore. It hurts and it’s hard to breathe.” So we sat her down and began to pray over her some more.

By this time my friends Gayle and Andrew and a few other people who knew Vicky came over. As a team we surrounded her with love, encouragement, and ministering healing to her through prayer. So many things began to happen. Vicky was getting free from lies and deep wounds and hurts from the past. She was going through inner healing and deliverance. Words of knowledge started popping about all these other conditions, and one by one healing and freedom came. Vicky was amazed and was so grateful to Jesus. She said, “I just figured it out this last week that this wasn’t God who was doing this to me but the enemy. And I’m not going to let him steal from me anymore. That’s why I came to the conference. I was wanting to be healed.”

I had just happened to notice Vicky and heard in my heart it’s was if she was like Blind Bartemaus saying “Son of David have mercy on me.” The Lord heard the cry of Vicky’s heart. After praying over her some more, I said, “Vicky do you want to try again to walk?””The enemy isn’t going to steal my healing from me. It’s mine!”

Then Vicky stood as a confidence and gift of faith came over her. She looked at us and said, “Bye! I’m walking!”

We were all blown away. With no one helping her, she walked again for the third time from the front to the back and back again, no pain and walking free and normal after 10 years of not being able to walk

.If I would have settled into what I was feeling, I would have missed what God was doing. Sometimes you have to rely on your friends and leaders.

Sometimes they see something you don’t see. In those moments you push past your feelings and trust your friends to see what you don’t see. Thank Robby and Happy for seeing something I didn’t see. Robby, if you hadn’t called me up, and Happy, if you hadn’t pointed me in the right direction, I wouldn’t have seen what God was doing with Vicky. Check out Vicky’s testimony video below. #mlmp2017