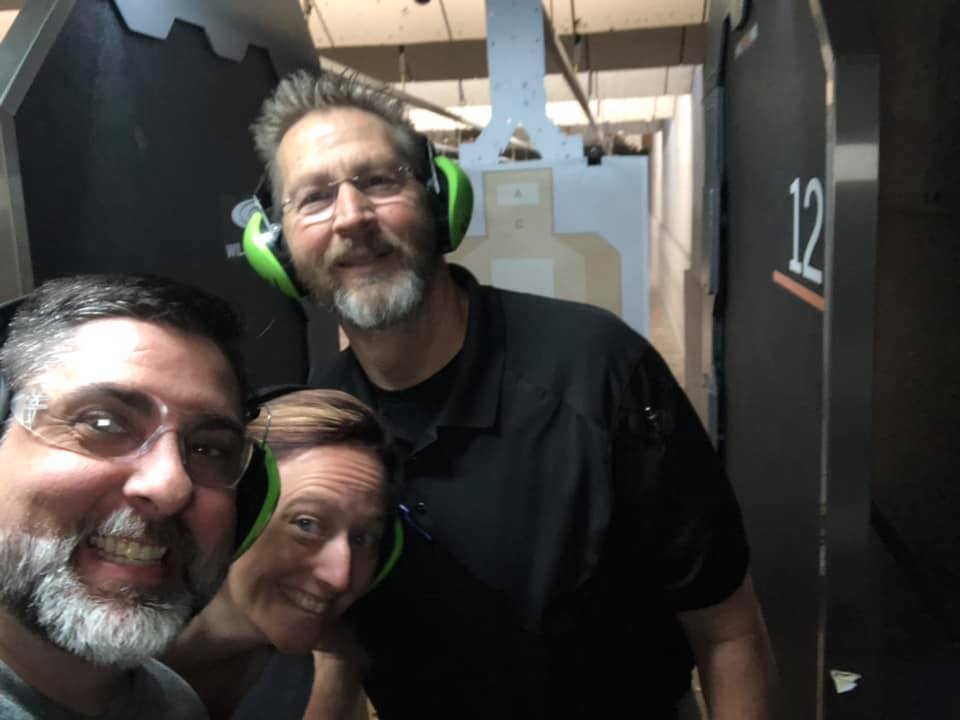 Check out this testimony and video below!!! Come on Jesus!!!

Today Jeanine and I went to get certified with Leland for gun safety and for me to get a license for conceal and carry. So I will now be the pistol packing preacher 🤣. I got a gun more for a hobby to shoot at the gun range.

We were getting checked in at the gun range by a guy named Nick. Leland felt the Holy Spirit speak to him about Nick needing healing in his body. Leland didn’t say anything because it kind of surprised him. After we were done with class and shooting, Leland shared with me what he felt. “Praying for people is not really my thing. It’s more my wife’s thing and my son’s thing and your thing,” he said.

Leland said, “Yeah, I’m not sure about that. I just teach people to shoot guns.”

“Well, the Holy Spirit spoke to you.”

He smiled and said, “Yeah, but I told you because that’s what you do.”

I smiled and said, “Yes, but this is what all Christians are called to do, and the Holy Spirit spoke to you, not me, about Nick. You teach people to shoot well. I teach people to pray for people. So let’s go find him, and I will show you like you were teaching me.”

“OK, but I’m not doing it,” Leland said. When we went to return our gear, Nick was nowhere to be seen. I think Leland was feeling like he dodged that bullet. Then Leland suggested we eat there at the gun range cafe. As we were eating, I thought I saw Nick. I asked our waitress if she could bring him to our table.

A couple minutes later Nick came to the table and said, “Hey, what’s up?”

I said, “Nick, sometimes I get words or impressions for people about issues in their life – whether that’s physical, spiritual, or emotional. Do you happen to have any pain in your body anywhere?”

“Yeah, man. In my knees. My left knee has been shot, and the other one is torn up from when I used to wrestle.” When I asked him what his pain level was on a scale from 0 to 10, he said it was a 20. He said the pain was constant, whether he stood or bent down. As he bent down I could hear the crackling in his knees.

I said, “Let me do something.” I took his hand and began praying for him. As I did, he reverently closed his eyes and removed his hat.

Every time I prayed, the pain kept decreasing. He was feeling heat all through his body. ”I can’t believe this,” Nick said in awe. After the fifth prayer, there was no more cracking, popping, or pain. Nick was stunned.

“Nick, here’s the truth. I didn’t get an impression for you. My friend Leland did who was teaching us today.” I looked over to see Leland’s glare. “But God spoke to him about you because he loves you. It was Jesus who just touched you and healed the pain in your knees. I couldn’t have done that.”

As we talked more, he said he used to have a relationship with God, but not now. “I think Jesus is inviting you back into relationship with him again.” I invited him to pray with me, and he said yes. “Jesus never left you. He’s not mad at you. He didn’t turn his back on you. He’s just reminding you that he loves you and how close he’s always been. He wanted to heal you because he cares about you enough to demonstrate his power to you and call you to do the same.”

Nick recommitted his life back to Jesus. As he looked up, his eyes, face, and smile beamed with joy. I said, “What we did with you is what you are called to do. Christians pray for the sick.”

Nick asked what church we went to. As I described where we were located, he said, “I’ve been there before! I have friends who go to that church – the Whitnahs. I love that family. They brought me to the church before I went to Afghanistan, and they brought me forward to get prayer.” At that moment, I remembered that moment and remember being one of the people who had prayed for him. That whole thing blew him away.

I invited him to come to church on Sunday. “Even if you can’t though, I’ll also see you again here at the gun range too.” He said that would be awesome.

After Nick left, I turned to Leland and joked, “That wasn’t that hard, was it?”

“Good, because next time you’re doing it. Now it’s your turn.” He grumbled a little bit but also said how fun and powerful that was.

Just like Leland, I feel a thousand butterflies every time I pray for people. My knees start knocking and my hands get sweaty. Just as I needed Leland to instruct me in my nervousness and fear about how to use a gun, I also helped Leland through his process so he could feel more comfortable and know what to do the next time he hears the Holy Spirit speak to him again. We don’t automatically know how to do this – we need to learn.

Remember, God is always at work. Our job is just to look, listen, and respond, and put Jesus on display with love and power.

I was so proud of Leland because he heard the Holy Spirit. He shared that with us and had compassion for Nick. He just needed a little bit of help so that next time he could be more confident – just like I needed help at the gun range.

PrevPreviousHealing at Panda Express drive-thru!!
NextTwo waitresses get healed and give their lives to Jesus!Next